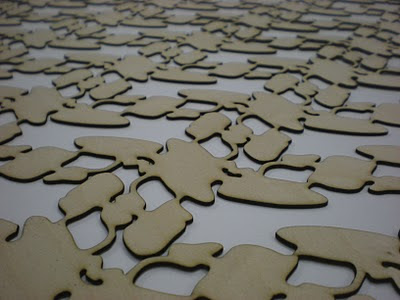 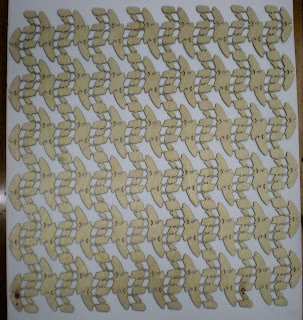 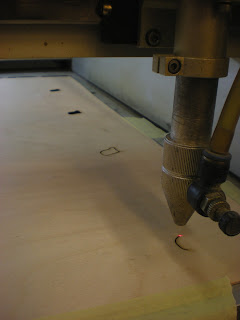 I've finally managed to get my Photoshop image onto the lazercutter. The image, which is also going to be used for screenprinting, was cut onto 1.5mm plyboard, leaving lovely singe marks around the edges. Next I will try calico and see how that works.
Posted by Steffi at 11:52 No comments: 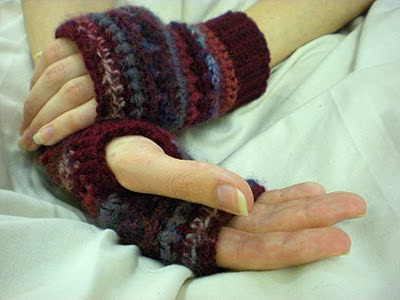 Who needs a night on the booze when there are gloves to crochet and Buffy DVDs to be watched with flatmates?
Posted by Steffi at 08:44 No comments: 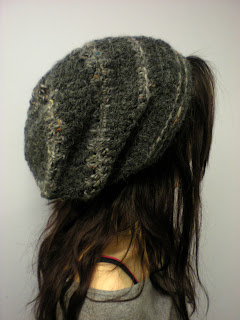 These were made over Christmas. Finally I have worked out an easy pattern with buttons!! The green ones are my favorite, though the pink ones fit better.
Posted by Steffi at 08:13 No comments: 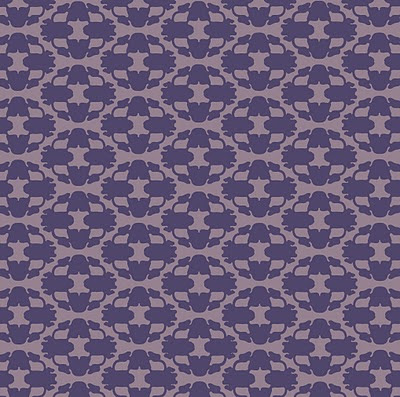 I know it's a bit simple but i can finally do something productive on Photoshop!!!!
Posted by Steffi at 09:50 No comments: 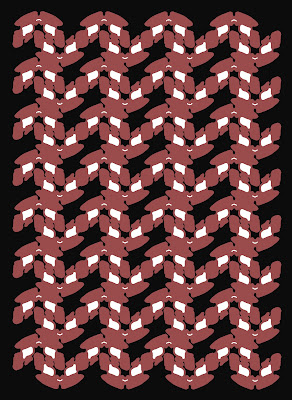 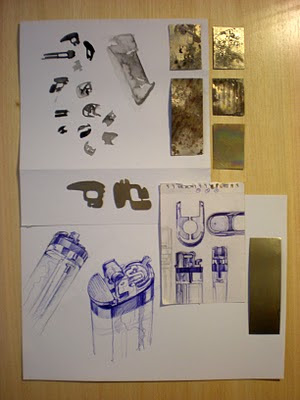 Project brief for the spring semester should have been called 'Everyday Object' instead of 'Found Object', mainly because my class didn't get to find the object ourselves, we were to pick from a selection given to us by our tutors. The objective is to reinvent a mundane object into something of aesthetic value. I chose a cigarette lighter because it had text on it, flammable liquids I could play with, and bits I could take apart. Within the first week the only starting point I have is the shapes the components make when put under a bright light, I've cut them out in metal, and had a go on Photo shop to make either pattern for a screen print or a lazercut. I haven't done very much but I'm quite exited at the moment.
Posted by Steffi at 06:38 No comments: 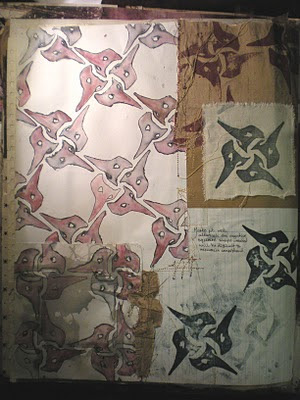 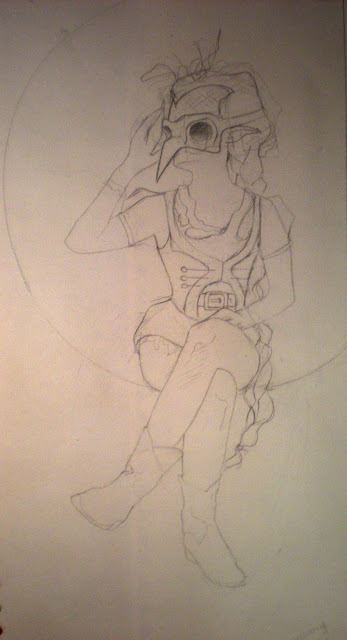 On Foundation I specialised in Textiles,and the first part of my final major project was to create a fabric print with Circus and Carnival theme. Despite the brief, initial drawings were more illustrative, with masks becoming the chosen subject matter. For the next half of the project prints were applied onto bags and pencil cases I had made.
Posted by Steffi at 02:34 No comments: 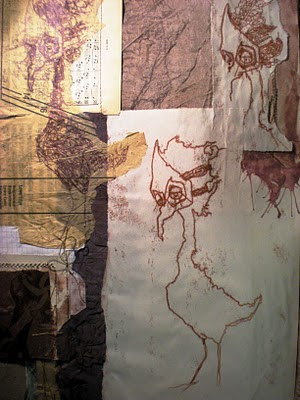 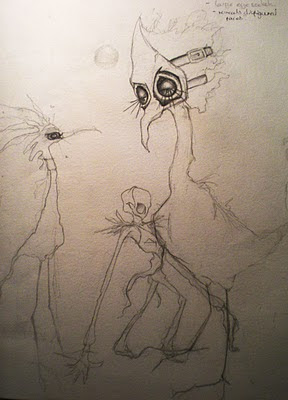 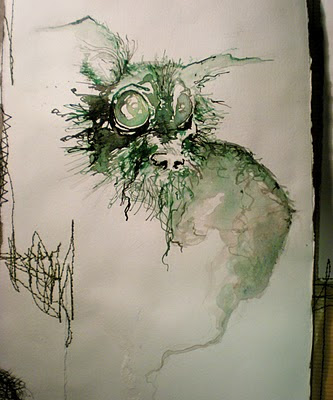 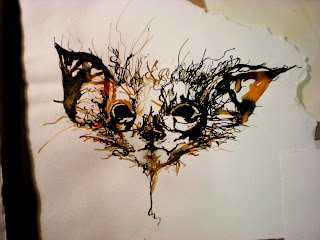 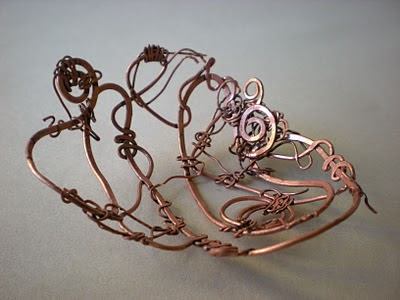 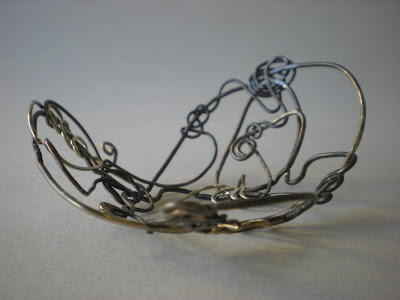 Annealed copper and nickel, that was knotted, pressed, then beaten to shape.
Posted by Steffi at 14:47 No comments: 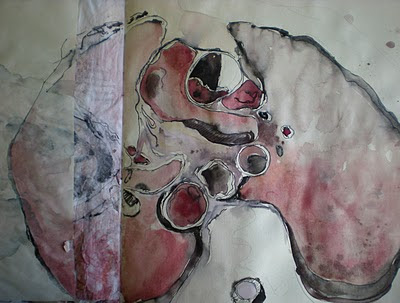 Dissection of the lungs, with heart, ventricles and oesophagus. My starting point was looking through anatomy books for the Connections project. I took an interest to how organs are shown in different shapes and arrangements based on the way the body is cut. Done in watercolour, salt and pen.
﻿
Posted by Steffi at 14:23 No comments: 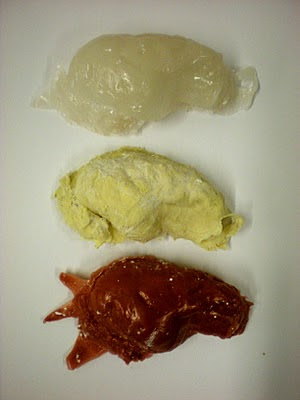 Ever wondered what the inside of a pigs skull looks like? God knows why I did. Here the Skull cavity was coated in latex, then a cast was made to make wax replicas. They look more like squashed rats than anything else but it was an interesting process to go through.
Posted by Steffi at 13:48 No comments: 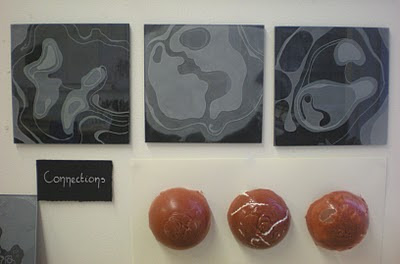 Sandblasted tiles, based on the middle ear of a pig
Posted by Steffi at 13:28 No comments: